Gnawing on hard chews can help your dog’s dental health, removing plaque, preventing tartar build-up and stimulating circulation to the gums. Deer antler dog chews are hard, long-lasting and appealing to your dog because of their taste and texture. They’re appealing to owners, too, as they’re not smelly and won’t stain things they touch!

However, watching your dog as they chew and picking a quality product is particularly important with antler dog treats. If your dog is large and/or tends to bite down directly on chews or tries to break them in half, antler dog chews may not be ideal, particularly if they’re made from older or more brittle antlers.

The deer antler we reviewed below already had the sharp edges removed for safety, however, dog owners should also check deer antler dog chews for sharp edges and remove them with sandpaper if needed.

Here are the 5 best-rated antler chews for dogs we reviewed online:

If your dog is a chewer, then focus those chewing energies on these delicious, durable deer antler chews from Regal Mutt. 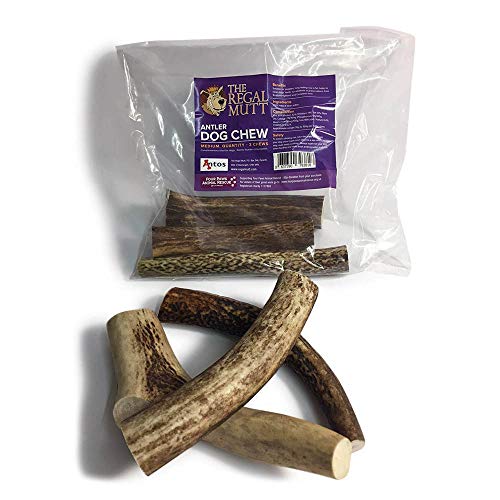 Sustainably sourced from Scottish Highland or European deer antler, they’re also free from additives and preservatives, low in fat and great for cleaning your dog’s teeth and gums.

This antler dog treat is great for you, too, as it’s odour-free, won’t stain surfaces and helps support animals in need, as 50p from the purchase of each pack goes to the Four Paws Animal Rescue charity. So buy these hypoallergenic antler dog treats and you know you’ll make not just your dog happy, but many rescue dogs too!

Stagbars are natural, incredibly long-lasting antler chews for dogs that will keep them happy and entertained for hours, helping to ensure they’re not tempted to use their chewing instincts on household items! 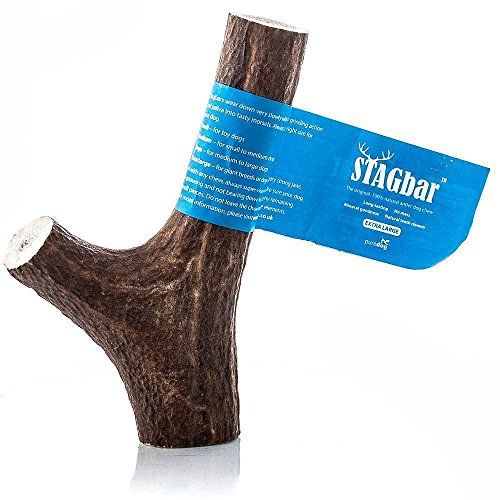 Stagbars last longer than any other dog chews on the market – longer than rawhide chews or compacted vegetable starch chews. Also available in small and large sizes.

Over a period of time, as they grind down the outside of the chew, the tasty, dry marrow inside is exposed, making a delicious treat. These antler treats are suitable for adult dogs and puppies who are teething.

They’re hypoallergenic dog treats and are low fat, especially ideal for teething puppies over 12 weeks, redirecting their energies away from your furniture and footwear—so they have benefits for your puppy and for you! 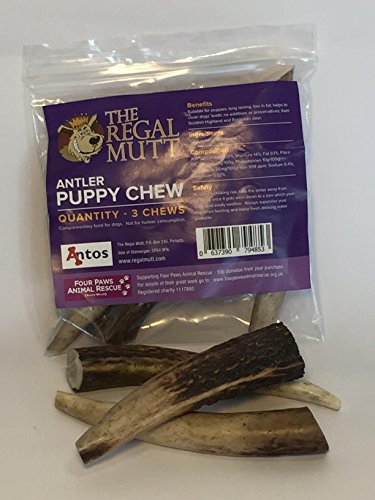 Regal Mutt is also a good choice for toy breeds. Horn Dog antler chews are additive-free, preservative-free and low odour, and they won’t leave stains or mess behind. They’re also very durable and will help to keep your puppy’s teeth and gums healthy as they chew. Available as single chews or in a 3-piece pack.

The Regal Mutt supports Four Paws Animal Rescue and donates 50p from each pack of antler puppy chews to this important charity.

Sustainably sourced from the naturally shed antlers of Red Deer and Fallow deer, these antler chews for dogs are cleaned and smoothed to reduce the risk of damage to your dog’s mouth. 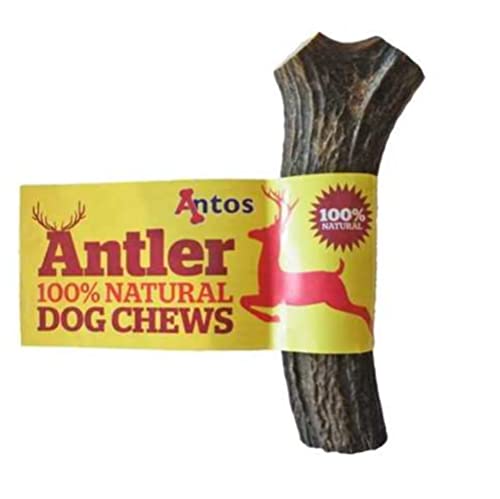 Our Antos Antlers are from Red Deer and Fallow deer, much of which is from Scottish highland herds, and have simply been cleaned (with no chemicals) and cut to various sizes/weights for dogs to chew on.

These tasty, natural treats for dogs are high in essential minerals (including calcium) to boost your dog’s health, while their shape and texture will help to keep your dog’s teeth and gums clean and healthy. Because these durable chews aren’t processed, they are more resistant to splintering, and they’re also odourless.

Naturally occurring differences in the chews’ shape, colour and texture will help to keep your dog interested in these chews, preventing them from turning their attention to the things you don’t want them to chew, such as shoes and chairs! Antos chews are weight graded and small chews are between 50g and 75g.

A great alternative if you would rather not give you dog genuine antler. 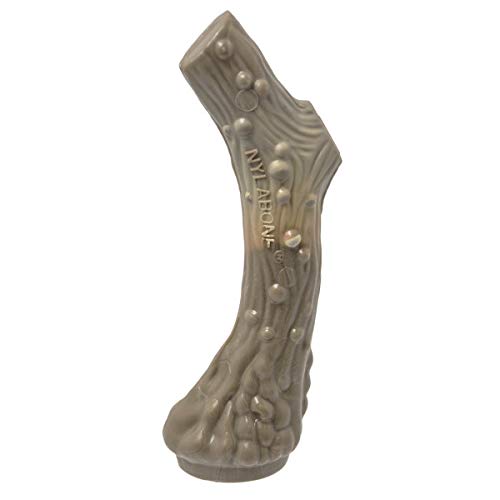 This long-lasting antler dog chew for extreme chewers is extra durable and challenges even the most powerful chewing style. The flavour is throughout the bone and not just on the surface, so your dog can enjoy the beef flavour for the life of the bone. Also available in small, large and extra-large.

This easy-clean, super-durable Nylabone antler chew is suitable for aggressive, dedicated chewers and is recommended for dogs up to 16kg/35lbs. Its knobbly texture will keep your dog entertained and help keep their teeth and gums in good condition as they chew. They will also love the venison flavour that’s not just on the outside, but throughout the bone, keeping them licking and gnawing away for many happy hours!

Here are some more deer antler snacks for dogs:

Not all antler chews for dogs are made equal, but these high-quality antler puppy chews are made from just the highly nutritious and tasty antler tip. 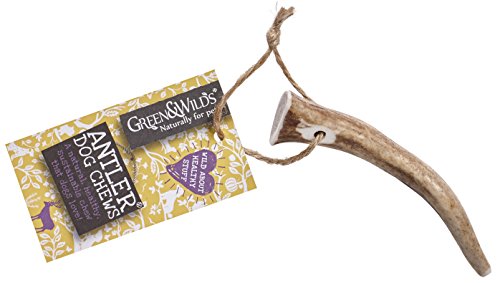 These puppy chews use the antler tip, which is the most nutritious part of the Antler. These are great for puppies or miniature breeds, full of flavour and small in size.

They’re ideal not just for puppies, but miniature breeds too, and are additive and preservative-free. A simple, long-lasting, unprocessed snack that will delight your dog and please you too, as it’s low odour and won’t stain surfaces. As this is a natural product, expect chews to come in a range of shapes with some variation in size.

These sustainably sourced antler bones for dogs undergo chemical-free cleaning and the removal of any sharp protuberances before being cut to size to make the perfect antler dog treats. 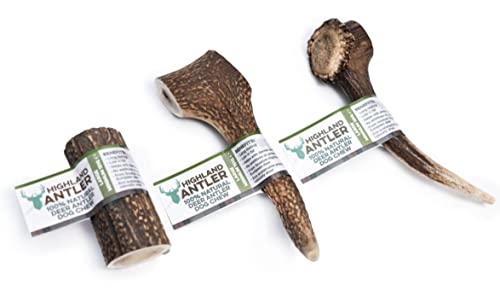 The Antos Antler satisfies a dog’s natural urge to chew, whilst also helping to strengthen and clean teeth. There is no odour from Antos Antler, and as your dog grinds down the antler over time, there is also very little mess.

They’re natural, durable and natural dog chews containing the calcium and other minerals vital for your dog’s good health.  Splinter risk has been greatly reduced by leaving the antler unprocessed, so let your dog chew this natural, odour-free treat instead of the household items you would rather they avoided! As they are a natural product, you will see a variation in the colour and texture of the chews, which will help to keep your dog interested in these antler treats.

Green Stag antler dog chews are only made from freshly gathered antlers that are then smoothed for your dog’s safety and cut to size. 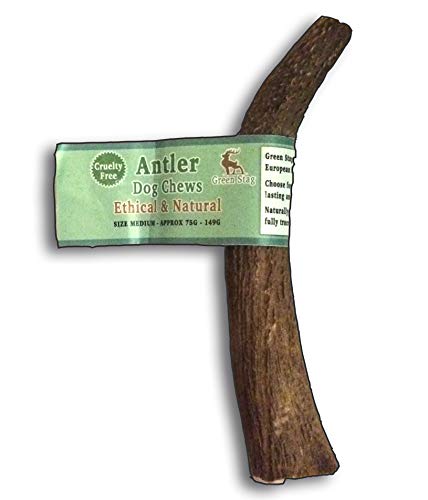 Green Stag antlers are freshly gathered, naturally shed, hard antlers that are collected during the springtime. They are 100% natural, we just cut to size and file any edges are to a smooth finish, to give your dog a healthy, long-lasting, natural chew.

Your dog will love these tasty, odourless chews and you have the satisfaction of knowing their antler dog treats are natural and full of calcium and other essential minerals—and that chewing them will help to keep your dog’s teeth and gums in great condition. These antler chews are graded by weight rather than size; medium chews are 225g-350g. They’re also available in small, large and extra-large varieties.

Deer antler treats are not ideal for aggressive chewers and dogs with high jaw pressure. Antlers are much safer for dogs who take their time when they chew, so if this doesn’t sound like your furry friend consider an antler bone alternative such as teething treats for dogs or this  Nylabone deer bone.

Like any very hard dog chew, they can cause cracked teeth or they may splinter, damaging your dog’s mouth. Vets advise taking antler chews away if your dog tries to bear down on them or if they become small enough to swallow, and not allowing your dog to chew more than an inch of the antler per day.

Just Dog Treats is a FREE resource for dog owners, here you will find everything from trusted product reviews to expert dog care advice. If you want to see a waggy tail, then you've come to the right place.

We dig up the best dog treats, snacks, toys, games, and entertainment luxuries to spoil your furry four-legged friend. All our reviews are based on research from our publishing team. Learn more about us.

As Amazon Associates, we earn from qualifying purchases. So if you buy your dog a treat we wish you many wagging tails! CDC Pet Food Safety: When picking the right food for your pet there are some important things to consider. https://www.cdc.gov/healthypets/publications/pet-food-safety.html

Pet Food Standard Agency: Are responsible for animal feed legislation in the UK including pet food and treats. https://www.food.gov.uk/business-guidance/pet-food

Welfare of Dogs: A well-balanced diet is needed for your dog to stay fit and healthy. Some dogs can also have special dietary requirements. https://www.nidirect.gov.uk/articles/welfare-dogs-need-suitable-diet

Join my mailing list for expert tips and advice on how to keep your furry friend healthy and happy.

Stuart is an animal lover with a passion for writing about dog care and health. Through his writing, he's spreading awareness on how dog owners can live better happier lives with their pets. He loves to read crime novels, watch cowboy westerns and spend his time with Rolley Washwilf the Springer Spaniel.